From the Bible, Quran, and Torah, to various legal acts, code and constitutions we have been given guidelines of desirable behaviours that enable us to coexist. Those guidelines cover most parts of our life whether in spiritual, social or personal context. Some disciplines have their own ethical codes as it is the case with medical doctors and lawyers. However, there are numerous other disciplines that lack this valuable ethical code. In this essay I will explore the ethical codes of visual communicators. Starting from the fact that there is not one universal ethical code for that discipline, I will assess different manifestos that give us examples of how that code could potentially look like. I will investigate the advantages of each of the above-mentioned instances, trying to establish what makes them effective. After looking at past examples I will examine how do their principles affect the present practise. 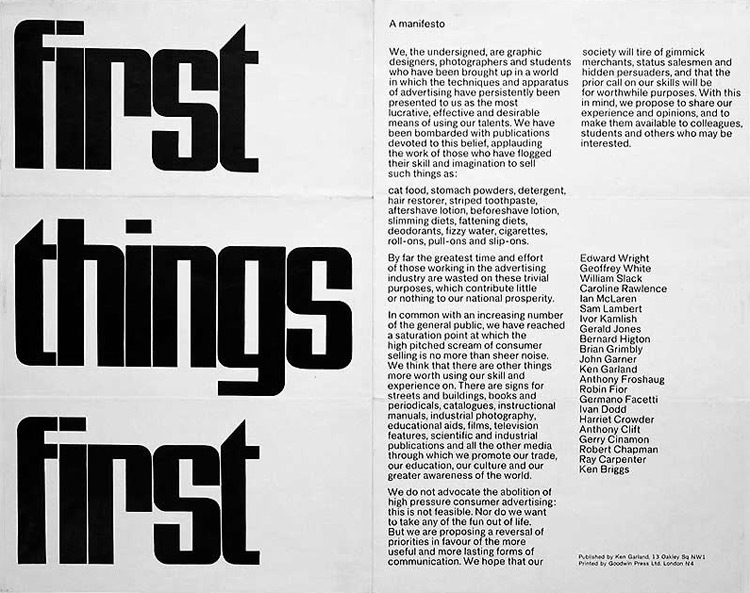 Although there is no one set ethical code of how designers should perform their practise, there are some individuals, groups and movements that choose to dictate that for themselves. One of the first examples of that kind of practise is “First Things First”, a design manifesto published in 1964. It was written by Ken Garland, and signed by a group of designers as a response to consumption growth and mass production. They believed that too much effort and work is being put in order to achieve unworthy purposes that contribute little, or nothing at all, to national prosperity. They expressed their tiredness of being bombarded with publications applauding those who use their creative skills to sell: cat food, fattening diets, deodorants and fizzy water. Instead they offered a shift in priority which encouraged designers to rethink why and more notably what for they are designing. They encourage designing for social good such as road signs, books, educational aids, industrial photography or scientific publications. Signatories believe that through these designers can promote culture, education and greater awareness of the world. However, at the same time they underlined that they do not wish to abolish the high pressure advertising (First Things First, 1964). The manifesto was an instant hit, being reprinted in hundreds of copies, most notably by a Labour Party’s Member of Parliament Tony Benn in his weekly column in the Guardian. Publication was translated into French and German, and gained world-wide recognition. Letters from countries such as Australia, US or even the Netherlands were sent to Garland expressing wide support, and inviting him for lectures. (Poynor, 1999).

Seeing this example from the time when graphic design was still emerging as a distinct discipline reinforces the belief that there is a general need if not for a code then at least for ethical guidelines. Since then different design studios have published their manifestos, some similar to others, some more unique and specific. Berlin based design studio Image-Shift, founded in 1999 by Sandy Kaltenborn, provided an interesting example of an ethical code. In many ways it is similar to the ‘First Things First’ manifesto calling for caution, conscience, responsibility and respect for the process. However, the very form of how they presented their principles was extremely intriguing – even looking at the title itself convinces the reader that this might be something different.

“this is not a manifest

we sketched out these 13 points to share our view on (graphic) design, on our visual communication practice. these points were written down by us, but are a product of entangled discourses and floating knowledge which others have put into this world before and aside of us. they are many – and they not even have been necessarily bound to a design project, as this is not about design at its core. this is a draft.”

Unlike Garland and his fellow designers, Image-Shift looked deeper into the political and social aspect of design. They strongly believe in the accessibility aspect of their design though emphasising on the personal values that cannot be crossed. The first principle they present is the positioning of the designer that enables to be independent from aesthetic trends and market requests. They strongly believe in working “as a service to society” and not for the industry itself. Furthermore, Image-Shift consider being a visual communicator to constitute a privilege that comes with an enormous responsibility. They feel responsible to create uniting, not dividing design (“be aware of exclusions we can shape by language or form”) (Image-Shift, 2009). Image-Shift’s draft (calling it as they wanted) is much more vivid, detailed and personal than previously discussed manifesto. This is the very essence that makes the manifesto/draft alive and efficient. These are not vague idealistic phrases but actual beliefs of Sandy Kaltenborn. He is not trying to change the world of design nor to call to other designers to change their beliefs. Almost as if he was saying “These are my laws and you can hold me accountable for them”.

It does not come as a surprise that Image-Shift’s work is a tribute payed to those principles. Every project they made has been in line with their draft. In 2011Sandy Kaltenborn joined a tenant initiative Kotti & co (Kotti stands for kottbusser tor), which is struggling against risings rent in social housing. Since then Image-Shift has supported the initiative with their graphic design expertise and produced countless posters, flyers and stickers. The most recognisable example is a sticker quoting Milton Glasers „I love NY“ design – which now said „i love kotti”. 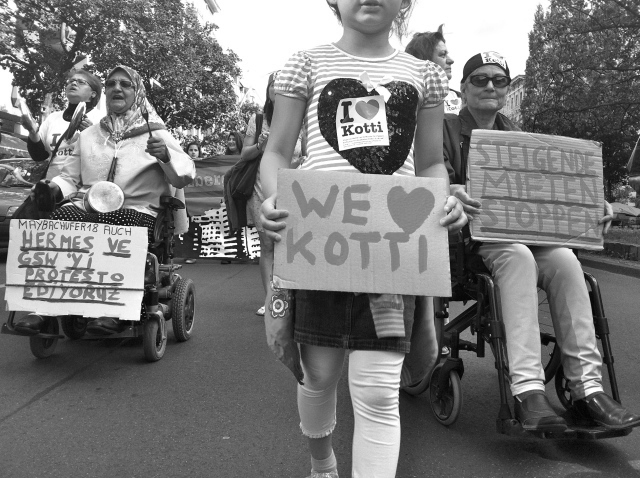 Bearing this in mind, the next question that needs to be answered is what constitutes the most important difference between two above-discussed examples? No matter how strongly Ken Garland, Edward Wright and all those that followed believed in their own principles, they have still remained mere principles – personal practise rules that tried to change the world of design. Because even tough ‘First Things First’ manifesto seemed to have had an enormous impact on designers at the end of the 20th century, over 50 years later we see a great triumph of everything they signed up against. If so many designers associate with this problem, why is the manifesto even more relevant today than it was back then?

In answering those questions it is worth looking at Adbusters – a non-profit, anti-consumptionism organisation that releases up to 6 issues of their ad-free magazine a year. At the beginning of 1999 they have decided that the time has come to remind designers of their responsibilities owed to the society. They met with Ken Garland, who gave the project his blessing, and later that year published a new rewritten manifesto “First Things First Manifesto 2000” (published also by Eye, Blueprint, Emigre, AIGA Journal, Form, Items). Like its original concept, this manifesto calls designers to put their skills to worthwhile use. However, it goes even further than the original version by pointing out particular people to blame for the commercialisation of design discipline. “Designers who devote their efforts primarily to advertising, marketing and brand development are supporting, and implicitly endorsing, a mental environment so saturated with commercial messages that it is changing the very way citizen-consumers speak, think, feel, respond and interact”. Furthermore, they blame those designers of having changed the very perception of graphic design. “Commercial work has always paid the bills, but many graphic designers have now let it become, in large measure, what graphic designers do. This, in turn, is how the world perceives design.” (First Things First Manifesto 2000, 1999).

Nowadays, 17 years later, we see a growth of non-consumption-driven design practises. More and more groups and individuals are constantly contributing to social changes working for charities or as design activists. Although the design world as a whole has not changed drastically, more design groups are realising the importance of the ethical aspect of design. Thanks to an extreme effort of activists and ecologists even large commercial companies feel the pressure of ethical responsibility. Power finally seems to be shifting away from them towards the public. For couple of years now we can see a growing interest in the ethical aspects as it is the case with the art collective Liberate Tate that was formed in 2010 in order to end the sponsorship of oil company BP. Different organisations now use their power as consumers to demand and enforce ethics onto big corporations. Even though oil companies will not stop polluting our planet in a day, it is still vital to hold them accountable for the damages they are making. Following recent trends many companies try to reduce their paper waste working towards the paperless society. It is also a common practise to include a footnote asking not to print the email considering the effect paper waste has on our planet. Some companies take this idea even further –  Minute is a meeting organising company from Netherlands that proud itself in being 100% paperless (they even got rid of the toilet paper). 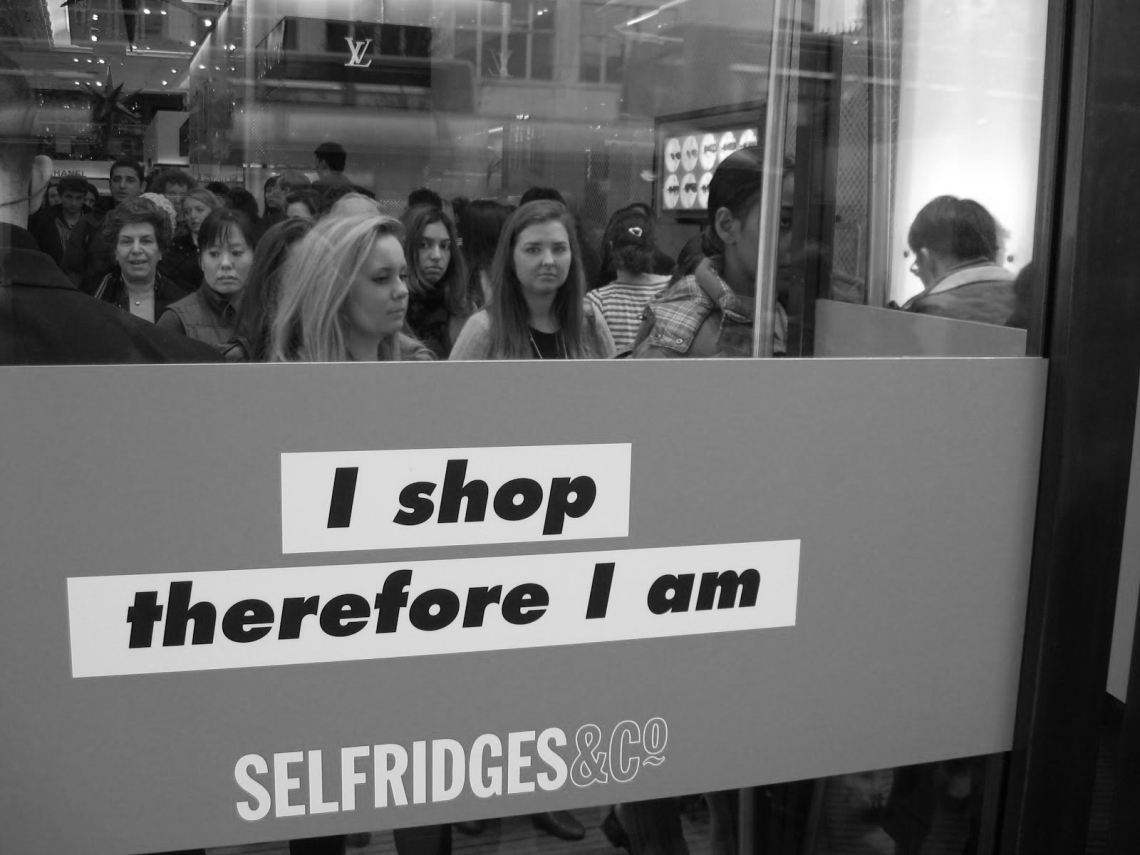 Furthermore, some individual visual communicators have formed their identity on a solid ethical codes. One of the most significant examples is American conceptual artist Barbara Kruger. Through her work she fights consumptionism era of profit driven giant corporations. For many years her work was known for bold statements commenting on gender inequality, politics and social problems. “During the early 1980s Barbara Kruger perfected a signature agitprop style, using cropped, large-scale, black-and-white photographic images juxtaposed with raucous, pithy, and often ironic aphorisms, printed in Futura Bold typeface against black, white, or deep red text bars.” (The Lilith Gallery Network). As such, it is understandable that it was an unwelcomed surprise when Kruger collaborated with retail giant Selfridges for their sale campaign. The shopping centre used her artwork inside their store to attract consumers with controversial posters. Unfortunately, Kruger never commented on the collaboration. Even though Kruger never wrote her own manifesto she has created a unified image of a non-profit feminist artist that fights against the consumption driven world (and not works for them). Provided with a code that she wrote would enable the public to hold her accountable for her actions.

All things considered, it seems reasonable to assume that the dialog about the ethical aspect of design is of utmost importance, and has been revisited by numerous individuals, as well as groups from the beginning of graphic design. More and more design studios around the world pay more attention to that aspect of their practise. Yet still not all of them have decided to take a step like Image-Shift and form their codes and practise according to values they believe in. Universe manifestos like First Things First are valuable to educate the public about our beliefs, but also to remind each visual communicator that they have a responsibility to the society. However, it is my opinion that personal manifestos written for a specific individual or design collective should be a common practise. First Things First may guide us and present a utopic future we all fight for, yet presenting yourself or your company with own personal set of principles becomes more accessible on a day to day basis and therefore is more effective. This way also clients would be given an opportunity to become a part of the discussion, holding designers accountable to the rules they have themselves set. The most persuasive fact is that everyone would be dependent on someone and answerable to someone making the whole process a well-functioning machine.