Graphic Design as many professions is in constant development, speeded up with fast progress of technology, its almost uninterrupted growth is stunning, but as everything in the world – its not perfect. On the outside design presents it selves as a highly accessible media that is a part of every persons life. However not many people see what is actually behind that well designed cover. Being such a vide profession design struggles with problems many of us have experienced on our own skin. One of which is equality.

Apparently when you type ‘notable British graphic designers’ in Google image the majority of designers shown will be middle-aged white men. There isn’t even any diversity in the pictures, 90% of them are black and white portraits, 50% of men are wearing glasses and 99% of men are trying to look like they thinking about something very intensively. 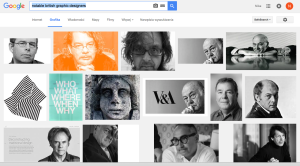 On the other hand when you delete the word ‘British’ you will get an opposite outcome. Now you wont see any faces, however you will be flooded with colourful wave of various posters and logos each one better then the other, but you will have to look dipper to find a person. Why is it that the relation between designer and his design is so powerless? 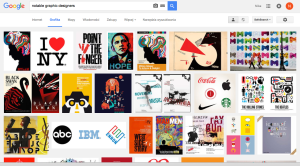 We all know famous poster with president Obama ‘HOPE’ and because its also a politically involved work even people with no interest in art whatsoever can recognise it. However do many of us can actually name the person who designed this highly renowned poster? How many not art related people can answer this question? 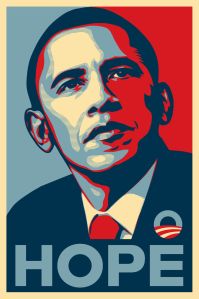 People tend to know main actors and a director of a movie but rarely music composers or film editors, which is understandable since so many people are involved in creating one single movie, but when it comes to a design all you have to memorise is one person’s or one group’s name. Why is it so hard then to link a designer with a design?

Maybe the problem lies in the fact that design is so accessible? Ordinary people don’t see design as art but as a media of communication as they tend to treat objects as a whole. When they buy milk, they of course always look at the packaging or are unconsciously attracted by it, but they never pay attention to details. Even if they find some posters/objects/packaging attractive they immediately associate it with the brand. We hardly ever hear ‘that specific designer makes really great posters for food companies’ but we can easily hear ‘Cadbury has really great posters’.

What is the difference in recognition between movie industry and design industry? It is always widely accessible to the public who edited the movie, so even if we don’t usually know we can easily check it up at the bottom of a poster, but when it comes to a piece of design we sometimes need to really dig to find out who designed it. Of course there are some easily recognisable designers which you can notice after specific typeface, colour or composition, but what other designers can do to make them selves recognisable? Could the solution be simply marking your work with your own trademark? Would the industry allow it? Other idea that might be used is to try to raise awareness through social media such as Twitter. Which is why our CTS group was asked to come up with a hashtag that tweeted could help bring underrated designers to light. So today I invite you all to take part in this project, if you know a great designer (or group of designers) that is not getting as much attention as he/she/they deserve please tweet about it using #HellWhoDesignedThat?.

PS.: Obama poster ‘HOPE’ was designed in 2008 by an American designer Shepard Fairey and is considered as one of the best political posters in the history.